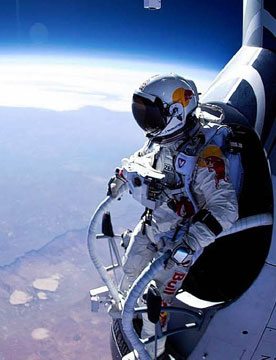 Hope you’ve been having a great week! I want to talk to you today about breaking records and how its done. When we mention breaking records, we tend to automatically think of world records or extreme things like Felix Baumgartner (above) jumping from space but what about our own personal records? This is what matters to us right? These records could be our own personal best on a Squat, the amount of days we’ve cut processed sugar out of our diet, the best result you’ve ever got in your career whatever that might be, stopped your neck pain that you’ve had for 15 years or even our ability to have broken out of a reaction habit like self sabotage.

So how do we break these records? Well, have you ever noticed that whenever someone has broken a world record, all of a sudden others start breaking that persons record. Whether it be Roger Bannisters four minute mile record which was seemingly impossible before he achieved it but had two other people running under four minutes in under two months since he broke it! Or even Felix’s jump record, this was expected to stand for a long time but has already been broken (rather quietly) by Alan Eustace, who also broke the speed of sound for the first time without an engine on the way!
So what does this teach us? You’ve probably already guessed it… Belief and perception.

The truth is, if you’re limiting yourself to what you believe to be possible, you will never achieve it. That is fact. You can see it in the way a circus elephant is attached to a peg in the ground and it thinks that it’s trapped, not realising that it has the power to tear up the entire tent if it wanted to. It’s just that its conditioned from a young age to believe that the peg has the power to keep it there.

It’s time to ask yourself and I mean really ask deeply, what is the one record you’d like to break? Maybe not a world record yet but something personal to you. You can’t tell me you don’t have any, that just means you’re bullshitting yourself and probably have been for a long time! Think big but start small and you’ll be surprised what you can do.

At Rupert Hambly health and Performance (name change as personal training is just part of what we do now) we have a system of coaching based on Neuro-linguistic programming (NLP) that allows you to address what you want to break through and how in a step by step process that anyone can do. And the reality is, if you’re not growing, you’re dying!

Here’s a great video of an instant belief and perception change: http://youtu.be/qX9FSZJu448

Break some personal records and then maybe even a world record 😉