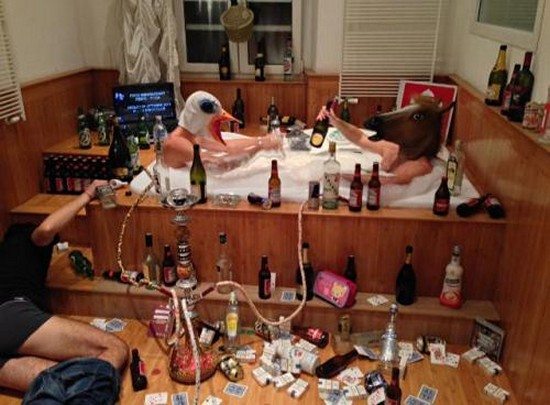 Did you know that certain drinks can destroy four days or more of your gym gains?

Now it’s Christmas around the corner, alcohol consumption triples and it’s an excuse to fatten yourself up almost as much as a Christmas turkey!

You don’t have to let that happen.

For starters, being ‘merry’ doesn’t mean you need 20 pints of larger, 8 slammers and a partridge in a pear tree. It can just mean pacing yourself with the right drinks.

And here they are, the best of the best and perhaps not a surprise to many:

For the hard drinkers: Tequila

Yes, its better on your system than any other ‘hard’ drink. Even a recent study conducted by the American Chemical Society (ACS) reveals that the sugars found in the plant that makes tequila could help lower blood glucose levels for people with type 2 diabetes. Researchers believe that this could help obese people lose weight. The extra bonus is that there are many fun things you can do with it like Jello shots and Tequila Roulette but I’ll leave the imagination to you ?

For the acquired taste: Red wine

No surprise here! Yes it’s still up there with the healthiest beverages but there are some concerns here.

Unless you’re the connoisseur and know the quality from just reading the label, go organic when possible. Why? Because we’re living in an increasingly toxic environment and adding toxins to an already alcoholic drink, is not a good idea…

Many commercial wines are produced with grapes that are overdosed on fungicides, pesticides and rodenticides. It’s a bath of toxic chemicals and considering the amount of grapes it takes to produce a good wine, you’re getting a condensed treatment of them.

Now this might be slightly one sided on my behalf because I really like the stuff but it is actually better than the vast majority of beers out there.

For a start, it’s fairly low on the alcohol with just 4%. It’s produced with whole grains, has a lower glycemic index level that the average beer and is fairly low on the calorie front (contrary to popular belief). Add the Iron content and it’s really not that bad at all!

For an even better option and something similar to Guinness, try Peak Organic. It’s a very high quality beer but harder to find.

To be healthy and keep yourself in top shape doesn’t mean you need to be a complete party pooper. It means making the right choices at the right time!

Have an amazing Christmas