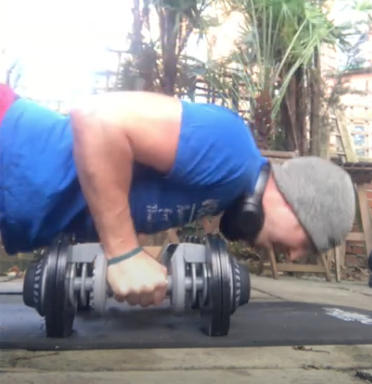 Half range or a full range of movement within an exercise has been a debate amongst athletes and bodybuilders for decades.

And at least from my perspective, it is not either or.

Clearing up some confusion on partial or half reps:

During the first lockdown I ended up putting on significant muscle mass due to training daily for hypertrophy and reducing total calorie expenditure.
Then I needed to drop about 5kg of muscle for the Bristol wave pool as the added weight is no good for the small size of the waves.
So then that was over and seeking waves out wasn’t likely at that time, I decided to set some strength and hypertrophy goals again.
Full ROM (range of motion) is optimal most of the time.
But partial or half reps come in useful when placing further demand on the type 2A fibres.
Especially at the end of a workout when you’re already exhausted and full range can be more troublesome.
Another benefit is that during the entire partial range set, is that the muscle fibres have constant TUT (time under tension) instead of the small rest break potentially at either end of the movement.
Which btw is where most people cheat subconsciously trying to avoid the ‘pain’.
So those looking to build muscle need to embrace the ‘good’ pain.
The exercise here is a close  parallel grip dumbbell push up with feet on a bench. With partial reps.

Rupert Hambly @ruperthamblypt
When it comes to posture, how you hold yourself in everyday life will have more of an influence than dedicated trai… https://t.co/XKnVe0ipxM
2 days