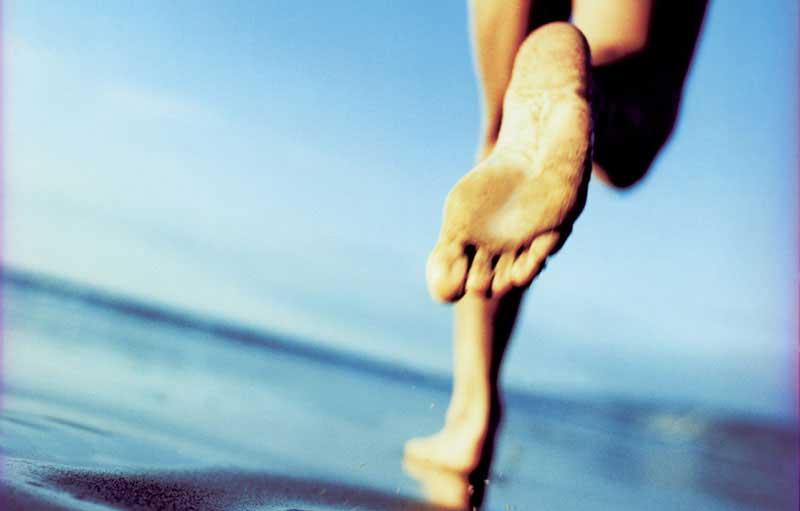 Those who work with us will know that we all personally adhere to minimalist shoes or even barefoot.

I personally grew up conditioning myself without shoes on the Towans, beaches and forests of Cornwall. So wearing ‘normal’ shoes doesn’t feel quite right for me and especially when training dynamically.

This blog could transform into a book but you can just read ‘Born to run’ for that. I’m here to simplify and give you the top points on why your gym shoes could be hampering your results:

There is gathering scientific evidence that walking and running barefoot results in enhanced performance and decreased injury risk (Warburton 2001).
There is evolutionary evidence too. The foot has been nearly 400,000,000 years in the making. With each passing generation – and each developing species – the biomechanics of the foot have been refined and enhanced to produce what we see before us – or below us – today.

To allow the foot to function as it was designed requires either walking barefoot – which in many instances is impractical and potentially hazardous – or requires footwear which offer protection without altering the function of the 400 million year-old design.
10 reasons to go barefoot!

Research has shown that running barefoot can result in up to 8% increase in efficiency (Squadrone & Gallozzi 2008, Warne 2013). It is not clear why this is, though it is likely to be due in part to the toes and the arches of the foot being allowed to function more effectively, and the way removing the shoe encourages a forefoot strike (Lieberman 2010) which means the Achilles and calf muscle are used more efficiently.

a. Decreased blood pressure;this is true – particularly if walking on uneven ground (ie cobbled streets or off road). The walking itself, of course, helps to support good cardiovascular function but, in addition, the fact that the foot strikes the ground at a slightly different angle with each step and is allowed to roll over the naturally convex heel (rather than a flat, straight, rubber plate) means that multiple muscle groups are activated resulting in greater pumping of blood back through the valve-based venous system (Vines 2005).
b. Reduced risk of deep vein thrombosis;for the same reason as above (2a) there is less pooling of blood in the lower leg and enhanced venous return.
c. Lower incidence of varicose veins;because there is better venous return, blood does not sit in the veins increasing pressure on the vein walls and creating varicosities. Instead it is pumped more efficiently back to the heart through enhanced muscular use in the lower leg.

It is claimed that increased awareness of foot position from direct contact with the ground (Robbins et al., 1995) may decrease risk of ankle sprain – and/or the reduced leverage and consequently twisting around the ankle (sub-talar) joint from going “barefoot” minimizes the risk of spraining the joint during a stumble (Stacoff et al., 1996).

Chronic ailments such as shin splints, ilio-tibial band syndrome and peri-patellar pain are attributed variously to altered biomechanical loading of the limbs (Siff and Verkhoshansky, 1999, p.451). When running barefoot on hard surfaces, the runner compensates for the lack of cushioning underfoot by plantar-flexing the foot at contact, thus giving a softer landing (Frederick, 1986). Barefoot runners also land mid-foot, increasing the work of the foot’s soft tissue support structures, thereby increasing their strength and possibly reducing the risk of injury (Yessis 2000, p.124).

Walking barefoot means, inherently, that the only heel you’re walking on is your own. Walking wearing standard shoes means, almost inevitably, you’ll have an extra heel. Any change in the orientation of the heel instantly changes the mechanics of the arch of the foot, but importantly also changes the mechanics of the low back – increasing the curve. An increased curve in the low back means that the small facet joints on the back of the spine which are not designed for weight bearing (Bogduk 2003) become loaded and, across time, painful.

70% of the body’s terminal nerve endings finish in the hands and feet. Of course, if you look to the evolution of vertebrates you find that they progressed from fish, to tetrapods (ie forelimbs and hindlimbs in touch with the ground) then finally to bipeds. Bipedalism not only requires significant balance but, by definition, means that our only two consistent points of contact with our surrounding environment are our feet. This is reflected by the fact that there are 200,000 sensory nerve endings in the sole of the foot – more than anywhere else in the body.

Funnily enough, the arches of the foot evolved that way not by chance, but for a reason. Counter to the commonly held belief that the arches are there to absorb shock, in actuality the arches are designed to store energy and return that energy to the gait cycle on the next step. Similarly, the natural arches of the spine are designed to perfectly store energy as the body “derotates” during the gait cycle (Gracovetsky 1988, 1997, 2001). Wearing shoes that “support” the arch prevent the arches from performing their function, while any change in heel height above that of the forefoot results in changes to the spinal curves compromising energy storage and recoil in these two key areas for efficiency and performance.

The traditional shape of shoes means that they round to a point somewhere in front of the 2nd or 3rd toe. This means that the big toe is often pushed towards the middle of the foot and the same is true of the little toe. This phenomenon coupled with a heel on the shoe – which loads the big toe even further – results in a deviation of the big toe called hallux valgus and ultimately bunions may develop.

We mentioned above (point 6) that the feet provide significant sensory feedback to the brain and are therefore critical in balance and efficient gait. However, it is sad to learn that the leading cause of death in people of the age of 65 years is not heart attacks, not cancer and not strokes – but falling (Chek 2004). In fact, 25% of elderly people who fall and fracture a hip, die within 1 year of that fall.

For those interested in improving in all these areas, we now offer 10% off the best barefoot shoes on the market, just click HERE